A while ago I asked for submissions for my “Ask Dave” series. Well now, contacting me is now easier than ever through my new contact form. It’s been a while since I had an “Ask Dave” post so if you have any burning questions, please send them along.

According to Fidelity, we need 80% of our current income to retire (see Canadian Capitalist’s “Fidelity’s ‘Scary’ Retirement Findings“, where I found this story). Canadians on average have 50% of their pre-retirement income in retirement, but this is no different from other countries; United States: 58%, Britain: 50%, Germany; 56%, Japan: 47% (see “Want to play in retirement? Test your future income“). If those numbers are not adequate, it implies that the average senior in the United States, Britain, Germany, and Japan are all in dire need. I doubt that is the case. (My opinion is that people should save as much as they want. You might need only 50% but if you want to spend a lot in retirement and travel instead of just tinkering in your garden then maybe you need 80% of your pre-retirement income, or maybe 150%, just in case.)

The funny part is that even if you wanted to get to 80%, the hardest way to get there would be to use Fidelity’s products. All their MERs are above 2% (click on Facts & codes). It’s too bad their retirement calculator doesn’t have a slider bar for the MER or rate of return, then you would be able to see just how badly these management expense fees can affect the final value of your portfolio, and in turn, your annual income in retirement.

I just did a calculation and if you invest $8,500 annually starting from the age of 30 you end up with $2 million at the age of 65 if the contributions are indexed to inflation and the rate of return is 8% (the return you might get if you buy a low-MER (0.25%) investment, like an index ETF). Decrease that return to 5.75% (the return you’ll get if you pay a 2.5% MER on Fidelity mutual funds or their managed portfolios) and you’ll have only $1.32 million at age 65. Assuming $2.64 million is what one would need to keep the same income one enjoyed pre-retirement:

So by simply not using a company like Fidelity and going with a competitor like Vanguard or iShares and buying index ETFs (with far lower MERs) instead, you can easily get closer to that 80% figure and increase your nest egg from to $2 million from $1.32 million without even having to save any more money. By the same token, it could probably be argued that one of the main reasons that Canadians do not have 70-80% of their pre-retirement income in retirement (and only have 50% instead) is because of the amount of MERs, fees, and commissions they pay every year to the financial industry.

See also:
Should Retirement Replacement Ratio be 50%, 80% or in between?

In last Saturday’s Globe & Mail (finally got around to reading the paper today), Rob Carrick compared the performance of Canadian equity funds to a low-cost index ETF that covers the entire Canadian market, iShares CDN Composite Index Fund ETF (XIC). It is the one I own to capture the Canadian market and it makes up the entire Candian equity portion of my portfolio. He went five years back because the ETF has not been around for 10-years yet. He compared this ETF to the “100 or so funds in the Canadian equity category that have been around for the five years to Sept. 30.” Surprise, surprise, only 5 mutual funds beat the index over that period. Here are some of those funds, sorted by 5-yr % return:

Note that some funds that started 5 years ago probably got canned due to poor results (or other reasons) and are thus excluded from the “100 or so equity funds” that Carrick mentions. See Survivorship Bias.

These results should come as no shock to anyone. If it does surprise/shock you, I recommend reading A Random Walk Down Wall Street as Burton Malkiel explains the reasons why index funds do much better far better than I can. You don’t even have to believe in efficient-market theory. According to Malkiel (and others of course):

But even if markets were not efficient, indexing would still be a very useful investment strategy. Since all the stocks in the market must be owned by someone, it follows that all the investors in the market will earn, on average, the market return. The index fund achieves the market return with minimal expenses. The average actively managed fund incurs an expense ratio of about 1.5 percent per year [ed: in Canada I think this is higher]. Thus the average actively managed fund must underperform the market as a whole by the amount of the expenses that are deducted from the gross return achieved.

The only way mutual funds will do you any good is if you can predict beforehand which mutual funds will be one of the handful that do outperform the indexes (good luck). He goes on mention that this claim is actually borne out in the data from the US market in the past 20 or so years,

Between 1974 and 2006, for example, the S&P 500 outperformed more than three-quarters of the public equity mutual funds–the average annual total return for the S&P 500 was more than 1.5 percentage points better than that of the media fund

Again survivorship bias plays a role here. If we included some of the funds that existed in 1974 but did not make it to 2006, the S&P 500 would most likely have outperformed an even larger fraction of the public equity mutual funds from 1974 to 2006.

There has been debate for many years on whether or not Canada should get rid of the penny. According to an article from CBC news called “A ‘penniless’ Canada?“, “more than two in five consumers surveyed (42 per cent) were in favour of withdrawing the penny from circulation, while 33 per cent wanted to keep the copper, according to the survey. The rest were uncommitted.” Those that wanted to get rid of the coin stated reasonable reasons, that “they wouldn’t have to carry as much change if the penny disappeared. They complained that the penny is inconvenient, lacks value and is too expensive.” Those that wanted to keep the copper stated utterly ridiculous reasons: “Those who opposed the penny’s death felt prices would increase as businesses “rounded up.” Other penny supporters said it holds sentimental value or they just plain liked the coin.” Huh? Now you know why the recent MMP referendum did not pass in Ontario…

Australia has already gotten rid of their penny and two-cent penny in 1990 and their currency has been worth about the same as ours for as long as I can remember. In 1867 the lowest denomination coin was the penny and how much was it worth back then? According to the Bank of Canada, the value of $0.01 in 1867 had the purchasing power of $0.27 in today’s dollars. So back then, they were getting by with the lowest denomination of coin being worth $0.27. This kind of makes sense, I mean what can you buy nowadays for less than a quarter? The only thing I can think of is 1 small piece of candy. Or a shopping card at some grocery stores. The cheapest pop from a vending machine that have seen is $0.35 at Safeway for the Safeway brand pop, but last time I checked that was gone and they were selling Pepsi products.

A more interesting article came out in July, which I first heard about on CBC radio. It says that according to an economic model called “D-Metric”, Canada should have gotten rid of the penny in 2005, around the time that an average day’s net pay in Canada exceeded $100/day. Apparently, “today’s purchasing power of the five-cent coin is equivalent to the purchasing power of the penny in 1972.” According to the article “A decision to ditch the penny would be up to the Finance Minister. The Finance Department says it examines coinage issues on a regular basis in conjunction with the Royal Canadian Mint.” So ditch it already!

It’s not that I really care that much about the penny. I almost never lay eyes on them or touch them, using debit for almost all my purchases and tossing all my lose change (if I have any) in an automatic change sorter at home. It’s just a bit embarrassing that we are so far behind on these simple things like pennies and electoral systems, and makes me annoyed that our politicians don’t do anything about it.

Most of the comments on this CBC article Save the Penny or Leave the Penny are for getting rid of the penny. Some made me laugh:

I say SAVE THE PENNY or else the next thing you know there will no more NICKEL, DIME, or QUARTER.
Prices WILL RISE because we here in Canada never get savings passed on to us. Instead of prices being rounded down, they will be rounded up!

I’m pretty sure that was a joke because it was signed “William Hung.” If you want to know how it really works, check out Swedish rounding.

I was just looking at MLS listings earlier today and I saw this nice little place on Main Street in Vancouver and noticed the following statement by the realtor:

Investor alert? So he is implying that is an investment and I wanted to see if he was right. He is saying that rent would be $2700 for the whole place per month, and the asking price is $788,000. I am assuming that he his being completely honest on that rent figure or over-estimating it, as he has a vested interest in making this property as appealing as possible. Let’s assume some ideal conditions, that I have a 25% down payment as well, a 35 year mortgage, and a low interest rate of 5.5% (even lower than ING’s lowest rate). Plugging those into MLS’ handy mortgage calculator, even then, the monthly mortgage costs are $3149.80/month. If we rent the place out we are still short $449.80. So this is not an interest-bearing investment of any kind. We have invested $197,000 for the down-payment, and in return we owe at least $449.80/month (most likely more if we include maintenance costs, property taxes, etc…). That’s a -2.7% annualized return. If we put down a $78,800 down payment (or 10%), we owe at least $1100/month. It starts to become profitable with about a $300,000 down payment. I have neglected capital appreciation of the home of course. Historically, however, housing prices have grown with inflation, as shown in the graph below: 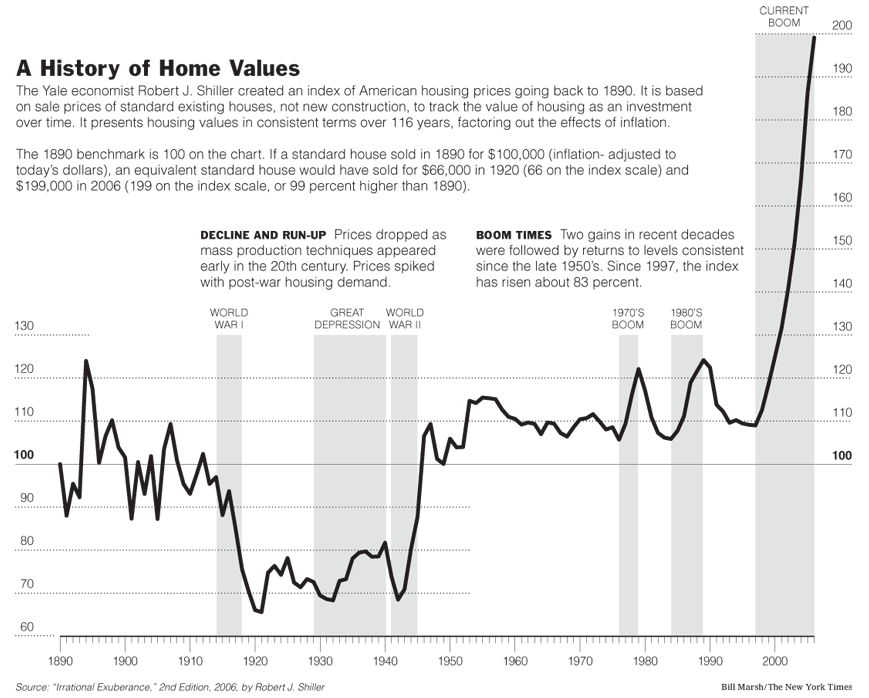 So one can never expect to make much off of capital appreciation of real estate. Not only that but as prices get higher and higher the probability that they will continue to grow faster than inflation decreases and the chances they will fall increases. Now back to the original MLS listing. How is this an investment?

I haven’t blogged in a while but over the past week I collected a few interesting links I present them to you now in my first “Link Fest” post. Enjoy!