I have been looking at adding an emerging markets component to my portfolio. I look at my choice as either being Vanguard’s VMO ($USD), iShares’ EEM ($USD), or a Canadian mutual fund offering (such as the TD Emerging Markets Fund or the Altamira Global Discovery Fund. Unfortunately there are no Canadian ETFs investing in emerging markets.

I decided that between the Vanguard VWO and the iShares EEM I would rather go with VMO as the MER is smaller. They hold virtually the same indexes underneath. The VMO one is a “Select” MCSI Emerging Makrts index that was designed especially for Vanguard a long time ago for one of their mutual funds. VMO also has more stocks. It’s daily volume is less than EEM but still high at 400k on average which is what EEM was at a few years ago.

The next thing I was worrying about was the foreign exchange. I have CAD dollars sitting in my E*Trade RRSP. If I buy VMO, E*Trade will convert the CAD to USD and purchase VMO. When I sell VMO (eventually) E*Trade will sell the VMO and covert the USD to CAD. So my CAD dollars gets converted into USD once at a rate of say 1.18 dollars CAD for every dollar USD. Then when I sell VMO they will only give me something like 1.14 dollars CAD for every dollar USD. I don’t know what E*Trade’s spread usually is (if anyone knows, please tell me) but I assume it will be 4-5%.

So I did some calculations to see how bad this hit works out to be on an annualized basis. In other words, what would the effective MER of owning VMO as opposed to a Canadian mutual fund be? I’ll assume that VMO always goes up by 10% every year, has an MER of 0.30%, the nominal foreign exchange rate is 1.16% and the spread is 4%. So obviously if you buy VMO and sell it quickly (say, within a year), it will have increased by 10% but the foreign exchange spread has stolen away 4%. A bit worse than the mutual funds then. But what if you hold it for a long time? It’s going to get better over time. If you hold it for two years, it will increase to 1.1*1.1 = 1.21 of it’s original value but it’s multiplied by (1-0.04) due to the foreign exchange, now what’s the effective annualized return there? It’s about (1.12*0.96)^(1/2)=7.78%, so that’s an effective MER of 2.22%. Already we are better than the mutual funds. (I’ve made an approximation above…it’s not exactly 0.04 that I should be using, it’s 1-(1.14/1.18)… but nevermind, if you want to know more, ask me). If you keep going with the years you’ll get the following graph: 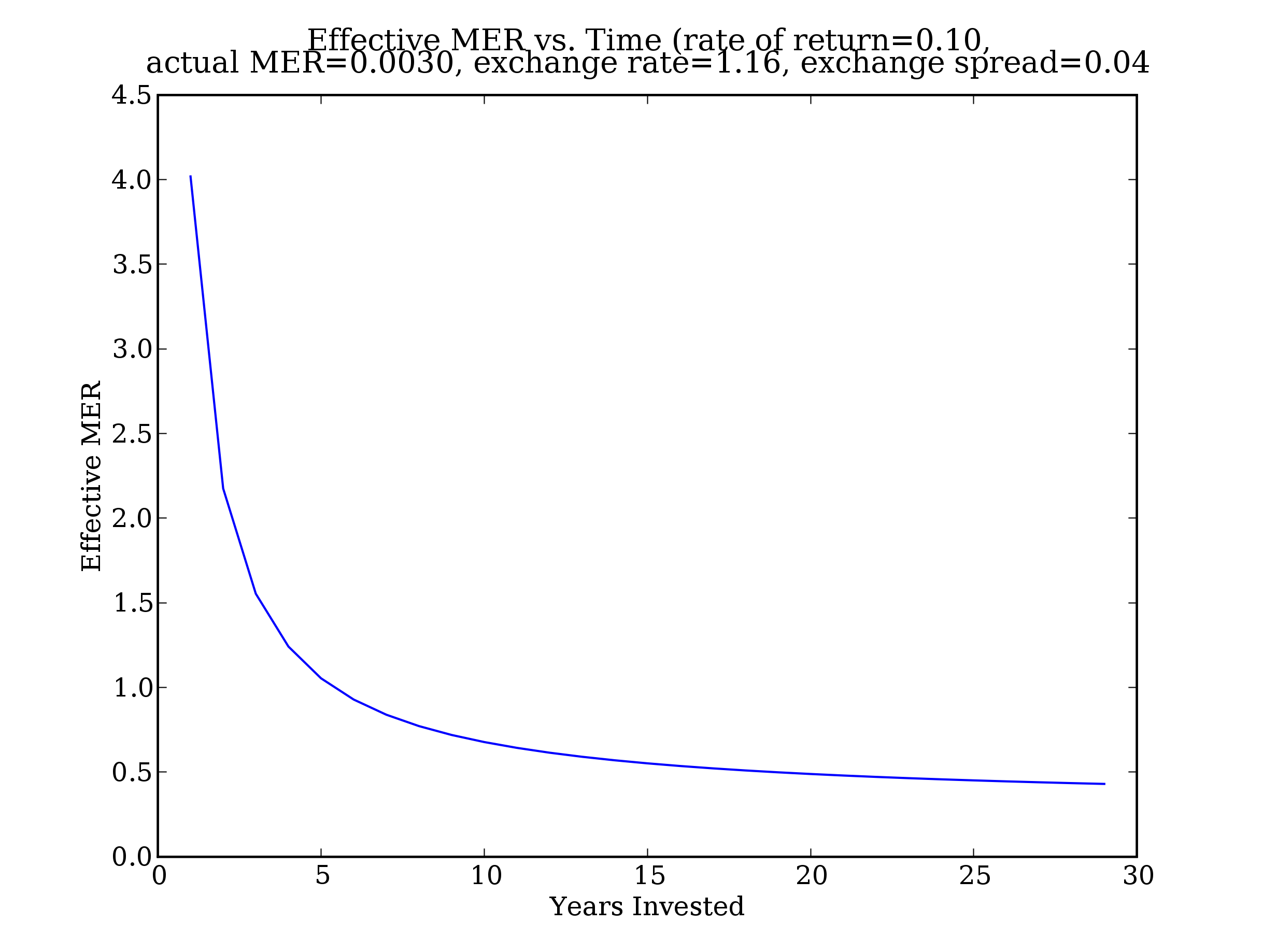 So it looks like it falls off pretty rapidly. Gets down close to 0.5% MER which is not bad. Essentially you can just think of the the foreign exchange hit as multiplying the PV by some number, so it lowers your PV. Over time the effect of lower PV is lessened as the investment grows due to compounding. Note also that I neglected commissions in the above analysis.

Keep in mind that with EEM this graph would be shifted upwards a bit. Since I have beaten the two mutual funds above by a long shot as far as cost goes, I think I might by some shares of VMO. I’ll make it about 5% of our portfolio and then I’ll make an effort to hold it for at least 10 years, where that curve really starts to flatten out.